Our horses Kar Zarzarrosa, KB Zaraguel and KB Zento derive from the famous „Z“-line that was founded by the unforgotten straight spanish arabian mare Zafarina at the Karolinenhof stud in Germany.

Born in 1979 Zafarina was bred by Ybarra de Domecq, Spain. Through the well-known spanish breeder Marieta Salas, the elegant grey mare was acquired by the family Jung of Karolinenhof Stud in Germany, where she became one of their foundation mares. 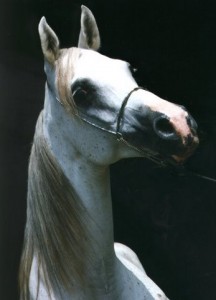 A daughter of the famous Spanish sire Galero (Zancudo x Zalema) and out of Facina (Garbo x Abisinia II), Zafarina came from the finest Spanish bloodlines. She had been a successful show mare in the USA; in Germany, she became a treasured broodmare and founded her own damline. The „Z“-horses descended from Zafarina have big spanish eyes, long, elegant necks with a good body and are very showy. Zafarina’s foals include the 1994 European championship classwinner Kar Zarzarrosa (by Abha Harim), the stallion Kar Testo Rosso (by Kar Testador), European Reserve Champion in advanced level dressage and German national res. Champion filly Kar Zarzuela by El Perfecto. Zafarina unfortunately died in 1999, but her legacy continues through her children and grandchildren all around Europe.